The entry below is classified as a LEGACY post, meaning that it was written (well) before the current version of Avalonstar was released. Although these posts have survived the numerous moves over years, there is no guarantee that they've survived the trip unscathed (especially the links).
LEGACY–
October 13, 2005

Did you know I did print design? Maybe not, but since I haven't shown anything I've done since launching this blog, might as well right?

My newest endeavor encompassed Facebook. I had sat in on a few meetings with a firm we had hired to do our identity work. To make a long story short, Mark didn't like their work and I volunteered to take their place. So after a lot of typing, a few versions and an education in four-color process, these cards were produced. As you can see, it resembles the look of a member's profile, and as a bonus, I even included a place where the employees could pick a tagline for themselves. If you're wondering about specifics, they're printed on 130-pound matte stock. There are three colors involved, Pantone 661, Pantone 656, and black.

Hopefully from here, we can get the rest of our stationary out. 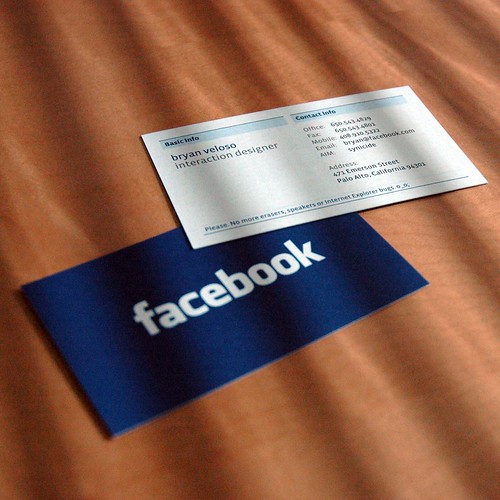