The entry below is classified as a LEGACY post, meaning that it was written (well) before the current version of Avalonstar was released. Although these posts have survived the numerous moves over years, there is no guarantee that they've survived the trip unscathed (especially the links).
LEGACY–
September 05, 2005 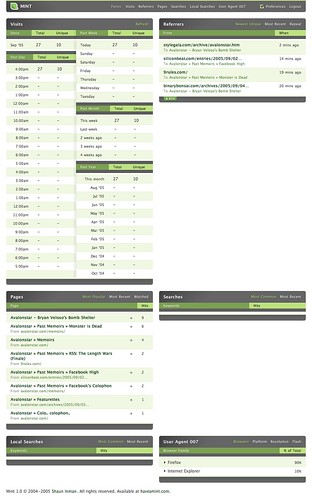 Now come on, how could something this cool be released without me talking about it. *slap*

Thanks again for taking an interest in Mint. Mint 1.0 is now available at http://www.haveamint.com/ I got that today at about 3:15 PM, right after I installed a new showerhead. So without even taking a breath, I clicked on the link and found myself at the beautiful Inman Mint Supermarket, where for $30 you could buy Mint, Pepper (-mint, should have been Salt & Pepper) and Junior Mints for those on the go. After I blinked, I found myself with a pretty activation code and four ZIP files on my desktop.

First thing I did was to look around for something that resembled an import function. Nothing. I thought the "update" section of the instructions might of had something on it. Nope. After a long sigh, I proceeded to feed Mint to my server. According to the server, it tasted good, and it's hard drive now smells fresh. Screw Mentos. Next I grabbed my activation code and tried to boot up Mint.

Nothing but a message saying that the code wasn't correct.

"Damnit!" I thought to myself while trying again about 5 more times, being greeted by the same message after every attempt. So after yelling my brains out to poor Brian, Khaled and Greg, I emailed the Mint-master about the problem. Ten minutes later I was told that I wasn't supposed to add the http:// before my domain name in the registration area. Mr. Inman quickly fixed the problem, showing a great sense of customer service, then asked me to try again.

So, it's up and it's really pretty. I never thought green could look so sexy, but Shaun did a mighty fine job with it. The Ay-yax portion of it is a little slow, as one will see parts of pages disappear to become window panes, but I got used to that pretty quickly. I have no idea how to configure the "Local Search Pepper" to work with WordPress1, but that can wait.

Overall, it's just so welcoming. I really like it and I'm sure my stats love it too. I can't forget to mention that Junior Mint goes really well with my Battery Indicator and Feedburner widgets.

Now... if only I can get my ShortStats ported to Mint, I'd be really happy. Shaun, stop avoiding my question. :p