The entry below is classified as a LEGACY post, meaning that it was written (well) before the current version of Avalonstar was released. Although these posts have survived the numerous moves over years, there is no guarantee that they've survived the trip unscathed (especially the links).
LEGACY–
February 13, 2007

The Road to SXSW

The road to SXSW is a hard one, especially when you don't have employers to back your expenses. ;P So that's where I've been folks, pushing Revyver's engine to it's limit. In many ways, this year's road to SXSW has been long (and we haven't even gotten to the literal portion of it yet). Considering some of the engagements I've already missed, I made it a point and a mission to have even more fun at this year's festivities. However it's already safe to say that I definitely have my work cut out for me this year.

Seriously I have no idea why I do this to myself.

The actual road to SXSW 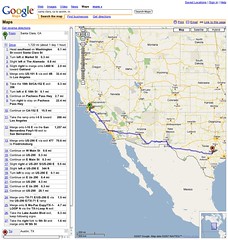 Yes, I'm driving to Austin this year. There are many reasons for this, the main reason being the I mean cats. To make a long story short, putting four cats into a kitty hotel for the numerous nights we'd be gone would equate to probably more than what we'd be spending for our own lodging. Instead, the first leg of our trip will take us down to Los Angeles and Casa Verduzco (Jen's parent's place) to drop off said felines. From there it's about a 2 day trip to Austin. It'll be the first time Jen and I have taken a road trip in our 3 years, 11 months and 24 days of being together; so we're both looking forward to the experience. Although... I'm sure the RX is not, but once he sees the open roads of the southwest, he'll change his mind. We're planning on getting into Austin mid-day Friday. (So yes, you'll be able to see my beat up Mazda if you're going. :P)

We'll fast-forward to Sunday, which will be christened "Judgement Day" (a name which I like to assign to days where my life is on the line). Sunday morning, I will be participating in Design Workflows at Work: How Top Designers Work Their Magic with the djagno designer, the illustrator and the new father (Jeff Croft, Veerle Pieters and Kelsey Ruger respectively). I'm really excited about sharing the stage with 3 others whom I admire and respect, and while they talk about their magic, I'll just stand by starry-eyed with the head nodding. Well, I'm kidding of course, but I assure you there's no "magic" involved in said "workflow."

That night, while Dan, Snook and Anand are at each other's throats for the blog award I won last year, I'll be a nervous wreck at the 300 Austin coordinating one of the biggest events I have ever taken on - this year's aforementioned bowling extravaganza. Considering we had about 100 people show up in total at last year's event, the fact that we have 200 people particpating this year is overwhelming when I think about it. Planning this goliath has kept me up at night, but I know it'll be worth it once the pins start falling.

(On a side note, if you've emailed me about sponsorship or I haven't replied back to your email, it's probably because I lost all of my email before the new year, so please email me again when you get the chance! Thanks!)

I wonder if you'll live through this.

I wonder that too. But it's that fear of failing that really drives me to succeed. It's probably the wrong way to go about things, but it's my tried and true method. Anyway, I look forward to meeting a lot of people this year. Oh and if you notice a stray Filipino in Austin's convention center, don't be afraid to come up and say hi!