The entry below is classified as a LEGACY post, meaning that it was written (well) before the current version of Avalonstar was released. Although these posts have survived the numerous moves over years, there is no guarantee that they've survived the trip unscathed (especially the links).
LEGACY–
December 22, 2008

Archive for the Holidays

I was supposed to be on a plane today. That'll mean I'll miss spending Christmas with my family. But as one Elizabeth Gast said to me this morning,

[T]ime with family is always precious no matter what day you get there. Dec 25th is just a day - Christmas happens in the heart

There I sat after rescheduling my flight, stuck in the mindset that I should be on a plane. What usually happens when those moments occur is that I start working on things I wouldn't normally work on. Too far removed to do any actual work, I thought, why not release the 2008 archive? Fortunately, that's what you're getting today. Think of it as my holiday present to you all (even though you were going to get it anyway. ;D). 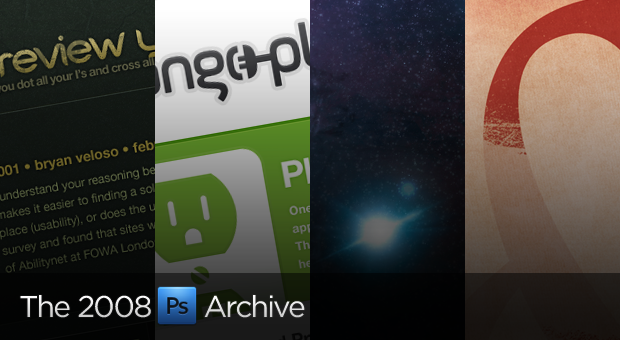 What awaits you this year is 13 files containing over 425 megabytes of Photoshop goodness. Oddly enough, 13 isn't as many as I've released in the past. This is mainly because I didn't do as much side work this year as I have in the last few. Despite the low number, I've tried to focus on pieces that show off some of the techniques that I've tried to perfect. Another unused mockup from this version of Avalonstar awaits, as well as the first version of Django Plugables and a prototype of what was supposed to be the 3rd version of Revyver.

As usual, these files are released purely for educational purposes. But I'm sure after 4 of these you'd know that by now. :) I sincerely hope you enjoy it and please spread the word! You can find the 2008 archive alongside my other releases at Revyver Labs.