The entry below is classified as a LEGACY post, meaning that it was written (well) before the current version of Avalonstar was released. Although these posts have survived the numerous moves over years, there is no guarantee that they've survived the trip unscathed (especially the links).
LEGACY–
December 10, 2008

I thought about starting a blog for Revyver for about, 5 minutes. After that I said "screw it," it belongs here.

It's been 30 days since the announcement I made about the future of Revyver. Congratulations have come and gone and it's back to business as usual. Well, it's a new business as usual. Even though I had already been working with Spectrum for a few months, it wasn't until this past month that I felt that Revyver had truly gotten off the ground. Now for the news.

On that end, I had been progressing towards a role that was a bit foreign to me, product development. Now sure, I've developed my own products, but they're exactly that, my own. I had never done any serious product development outside of that. It was frightening for me to not only step out of my box, but to then step into another box that's completely foreign and come up with compelling ideas. I'll blame it on my relative inexperience. Well, actually, complete inexperience. But I'd like to think I learn quickly. The product is called PlanetTagger which will be a "geo-social-networking engine targeting specific interest groups." Examples of said "interest groups" would be Seahawks fans (if they have any left) or your local Coworking group. There's not much I can divulge at the moment, but that'll be changing pretty soon.

The Addictionary has been gaining some traction as well. The Addictionary Proper has seen the front of a good number of startup sites and even some design blogs. Combine that with the new print-edition of the Addictionary, "Brave New Words", and our recent deal with E!Online to create the Celebrity Addictionary, things are looking up for the dictionary that Silicon Slopes built.

Our first project, Hello! Ranking has been progressing quite nicely. I've had a good amount of time in between the hours I do Spectrum work to hack on our little J-pop game. It's been a lot of fun to see such a big idea of ours start to see the light and we're hoping to invite a group of Jen's peers to play around with it before the new year. 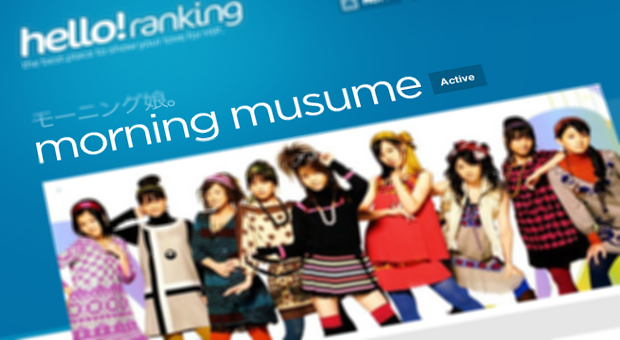 Probably the most exciting part of the process has been envisioning the potential popularity of the service. When we first came up with the idea earlier this year, we only saw maybe one or two blogs covering Hello! Project rank their favorite artists. Now we're seeing many newer blogs post ranks as introductory posts and still others that keep their rankings up-to-date manually. The fact that we'll be making all of this that much easier for them makes us extremely excited. For me, it's been a validation of all the work we've already put into it.

Jen's been hard at work on another project called J-ongaku, or literally "j-music." It's a wiki that is set out to appease the masses of Japanese, Korean and Chinese music fans who depended on a wiki called wiki.ThePPN. ThePPN recently suffered a DDoS attack and has been down for about a month because of database issues that they don't wish to disclose. As an aside, I think it's poppycock1. It's almost inexcusable for a site that a good number of people depend on (people have been literally "crying" about its absence) to be down for so long without any status other than, "it's coming back." I am by no means a system administrator, but I know enough about databases, MySQL and InnoDB to say that a month with that reasoning is a bit off.

If you or anybody you know is a J-music, K-music or C-music aficionado, she would graciously appreciate the help in either building out the wiki or spreading the word about its existence. It's not much at the moment and it will be put on the back-burner if wiki.ThePPN ever does come back, but the odds of that now are pretty slim.

The past few months have been a learning period for me. Playing a major role in two growing companies requires a lot of what I seemed to have trouble with in the past--balance. The hardest part about achieving balance is being able to switch gears on a dime; the ability to work on Hello! Ranking and then quickly turn to the Addictionary if there's a problem there.

I've been struggling with what should have been one of the first lessons that came with being a freelancer. Apparently those pages had been ripped out of my used textbook. Unfortunately, with the economic climate, things are not about to get any easier on that front. But like I said, I'd like to think of myself as a quick learner. Overall, things are extremely exciting and even with the economic situation there's little that could stop us now.