The entry below is classified as a LEGACY post, meaning that it was written (well) before the current version of Avalonstar was released. Although these posts have survived the numerous moves over years, there is no guarantee that they've survived the trip unscathed (especially the links).
LEGACY–
September 12, 2009 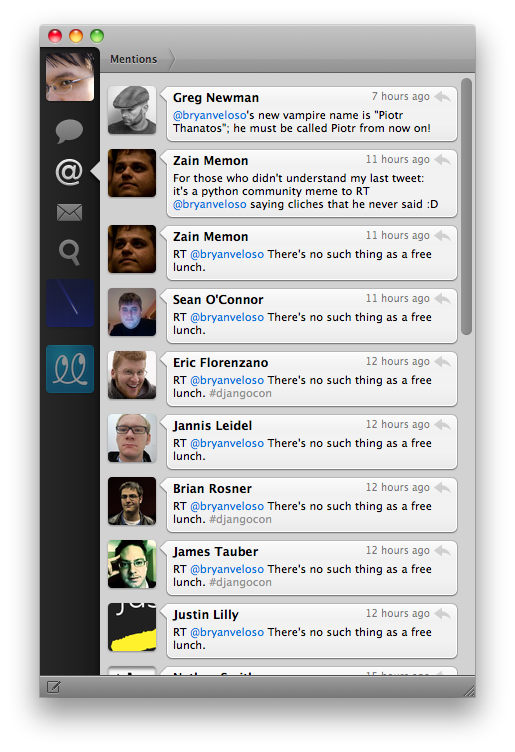 There was a day, way back when, when I got spambotted. But this wasn't just any spam, hell I don't even know if it was spam account but apparently said account retweeted the following:

RT @bryanveloso There's no such thing as a free lunch.

Now I looked at "her" timeline and she wasn't doing this to everybody, so it wasn't a program (maybe). Yet, I never said that phrase in my life, let alone tweeted it, which was odd because usually bots need a trigger. But the minute I said something to that effect, a good set of Django friends, specifically the boys from the Pinax Project1 took hold of it. The rest is history as the "retweet Bryan saying cliches he never said" running joke began.

Every now and then with seemingly no trigger, they'll break out the dreaded lunch retweet from the past, like above, which they made sure to do before DjangoCon ended. And here I thought I could get away scot-free. ;)

To conclude, two points. First, the Django community rocks (well... I already knew that) and there is no shortage of running jokes (just ask #futurenewman). Second, in order to join the Revyver team in the future, you must be the blunt end of a running joke within 90 days of being hired.

And now... back to sprinting.