The entry below is classified as a LEGACY post, meaning that it was written (well) before the current version of Avalonstar was released. Although these posts have survived the numerous moves over years, there is no guarantee that they've survived the trip unscathed (especially the links).
LEGACY–
January 08, 2010

Today, the mini-site for the next OK! Happy Cog'aoke went up--I smiled, reminisced for a second and I felt it was time to say something.

From the day I first heard about South by Southwest, I've watched a mythical torch pass from one "not just beer" event to another "not just beer" event. Before I ever thought of attending, there was the institution of kickball. Then came bowling and a span of events that I had the honor of running three out of four years. Now, it's karaoke.

There was a moment when I was driving with Chris Harrison and Jen back to our hotel, when I found myself at a crossroads1. The bowling event I had just finished holding had landed in the red with attendance that was half of what was desired. While I could have easily placed the blame on two other "just beer" parties being held in the same timeslot, Facebook's and Tumblr's, I didn't. Rather, I was urging myself to come out on top in 2010 with a lot of encouragement from Dan and Chris to make ABXMMX epic.

I went to Cog'aoke the next night, and I was--quite frankly--blown away. The enthusiasm and energy was so overwhelming that I even got up there and sang (quite badly in my recollection, but an awesome experience nonetheless). A weight was lifted after that night and it wasn't until we were sent packing from Seattle to Los Angeles that I knew it would be a very long time until I ever found myself at a conference. So, it was time for the ABX to take it's final bow.

The years of the Avalonstar Bowling Extravaganza are years I'll never forget. From riding with almost 80 people in a public bus to the University of Texas to bowling a miserable 53 in its second year, the smiles and memories made every minute planning it worth it.

If you're asking "why not just let somebody else run it," my answer is that "it pains me to be behind an event that I will more than likely not attend." But, that's not to say that the idea of bowling at SXSW is lost forever, I just won't be behind it. It's time to let another find the idea and run with it.

With that said, to everybody that has attended since 2006, thank you so much for your support. :) 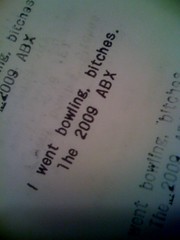