The entry below is classified as a LEGACY post, meaning that it was written (well) before the current version of Avalonstar was released. Although these posts have survived the numerous moves over years, there is no guarantee that they've survived the trip unscathed (especially the links).
LEGACY–
March 21, 2006

Hah, I can hear the Avalonstar fans of yesteryear rejoice. But no, this is not the return of the famed 12th version to this domain, but rather, a port to a WordPress theme. I don't think I could have ever seen myself releasing a theme, but the time has come for me to bring back one of my favorite versions of Avalonstar. Now, it's for your use instead of mine.

This has been a great nostalgic project at the least, since I was able to revisit my old code and laugh at my old process. But enough of this reminiscing. What you see here is by no means a final version, but whether or not I iterate on this is left to be determined. Because I haven't tested this in IE, even though this is a 1.0, treat it like it's an alpha. I really just wanted to get this out and into your hands to play with. I'm sure it at least degrades gracefully in all those trashy browsers. ;) 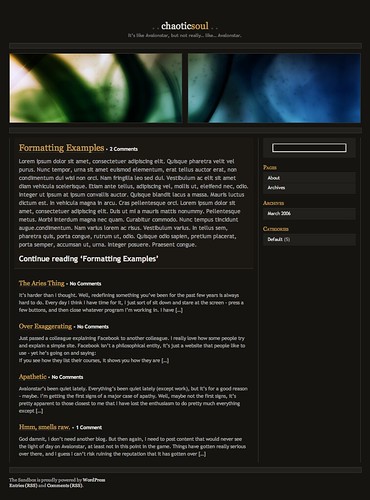 Okay, bugs. How well this is received will choose the bug reporting route I take, but for now just keep the bugs coming to my email or the comments below. Either way I hope you like it. Finally, a special thanks to Phu for inspiring me to do this. Let me know if you use it!