The entry below is classified as a LEGACY post, meaning that it was written (well) before the current version of Avalonstar was released. Although these posts have survived the numerous moves over years, there is no guarantee that they've survived the trip unscathed (especially the links).
LEGACY–
June 17, 2006

Logos of Times Gone By

Archive.org did something right for once. It kept images of logos I did from Version 12 (ChaoticSoul) of Avalonstar, so I decided the world see something that I used to be able to do. Back in 2002, I was really big on making logos, so much so that I made 5 of those that you'll see below in one day. (Man, I miss those days when inspiration really ran free.) I believed the streak came to an end when I finally decided on using the Phoenix logo for Avalonstar. Ever since then, I haven't designed any logos because my style (and skill) doesn't seem to fit the demands of today.

At any rate, here's an image of all the logos I did (that didn't fall victim to the fatal hard drive crash of 2003). Granted, I did these 4-6 years ago, so they're not the best. ;) But I do still love a bunch of them. 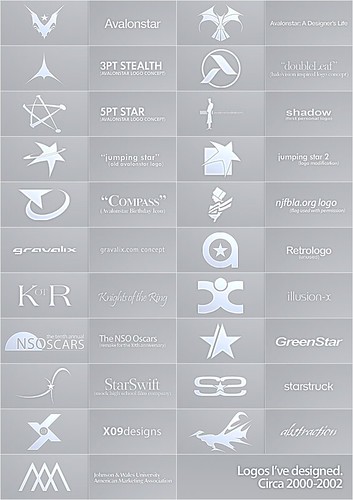 From left-to-right in a zig-zag shape: